There is a hymn that includes the lines, “the church is not a building, the church is not a steeple… the church is its people,” which is perfectly true when recalling the history of St. Giles. Back in 1957 the congregations of North Hill and Pleasant Heights Presbyterian Churches agreed that the time had come to amalgamate their resources and build a beautiful new church among the new developments at the northern edge of Calgary. Such was the vital force of this combined congregation that the new church was dedicated in December, 1958, just 7 months after construction began. During this time the men of the church worked hard as Elders (women were first ordained as Elders in 1972) and on the building committees, etc., while the ladies raised astonishing amounts of money at teas and sewing bees that went towards the furnishings and the mortgage. Simultaneously, many of the congregation were also involved in the making of the Burning Bush rug, which now hangs in the balcony. Men, women and children all took turns to “hook” the 151,000 stitches that comprise the rug. In 1959 the church school children raised most of the funds to pay for the oak font, which was ordered from T. Eaton Co. It is a testament to the love these charter members had for St. Giles that many have remained with the church their entire lives.

St. Giles is located on high ground, with its blue steeple soaring over the trees in adjacent Confederation Park. It is hard to believe that when the foundations were first dug in 1958 there was barely a tree to be seen between the construction site and Nose Hill. At that time the valley, which is now called Confederation Park, was an insect infested slough, used as a dumping ground for old vehicles and bed frames. Once the park was developed in 1967 (several local churches, including St. Giles, paid for a bridge that spanned the creek) it became a place of beauty in all seasons and a great location for the church school to hold picnics and tobogganing parties.

The building has seen several changes over the years. When it was first built plain glass windows were installed in the sanctuary. Beginning in 1966 various families and groups provided the funds for the magnificent stained glass windows that now provide such a jewel-like quality to the light in the sanctuary. In 1998 volunteers from the congregation renovated the basement of the church, greatly improving the kitchen, lower hall and office areas. A few years later, to celebrate the new millennium the chancel was redesigned and the neighbouring house joined to the church by an extended narthex. This resulted in more accessible meeting space, a nursery, an elevator, a wheelchair accessible bathroom and, above all, a large area for post-service coffee and conversation.

St Giles has always been involved in the neighbouring community and was instrumental in the formation of the Confederation Park Senior’s Centre, Confederation Lodge and Parkview Village in the 1970s. The St Giles choir has always been an important part of church life and has provided music at many community venues over the years. In 1988 the choir was accepted to sing with the massed choirs for the opening ceremonies of the 1988 Winter Olympic Games. It also participated in the massed choir at the Olympic Arts Festival Opening Gala of that year, the only church choir to be accepted. In 1999, following the renovation of the basement, St Giles joined the Inn from the Cold program in which homeless families are given dinner, lodging for the night, breakfast and a packed lunch. This program continues to this day and many of the same church members continue to volunteer each month. In 2001 nearby Chalmers Presbyterian Church closed its doors and many of its members were welcomed into life at St. Giles, where they have become enthusiastic contributors to the church.

The congregation of St. Giles celebrated its 50th anniversary in 2007 and it is looking forward to spending the next 50 years participating in the life and mission of the church and in reaching out to members of the community who are seeking more spiritual meaning in their lives.

or E-transfer to: treasurer-StGiles@shaw.ca through your online banking

St. Giles' services are available online as well as in our sanctuary. Visit our YouTube channel each Sunday at 10AM for worship as we continue to share the Good News of God's love for us and His words of encouragement from Scripture. 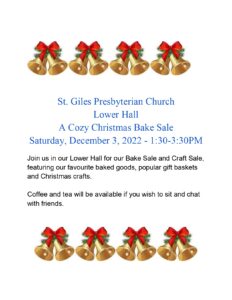 Called by Christ, Committed by Faith, Connected by Community.